Hello all!  It’s Wolf Awareness Week this week and it’s definitely needed.  Wolves are often very misunderstood animals, sometimes especially by ranchers, which can be a powerful lobbying force against them.  It’s important to get the information out that wolves are a vital part of a balanced ecosystem and have made great improvements in the areas they’ve been reintroduced, such as Yellowstone National Park!

I’ve done a number of posts on wolves over the past few years, including an interview with Spencer Wilhelm, the Volunteer Coordinator and Operations Manager for the Wolf Conservation Center here in New York.  Check them out!  Introduction to the Wolf, Wolf Awareness Week and the Wolf Hunt, Wolf Debates Abound. 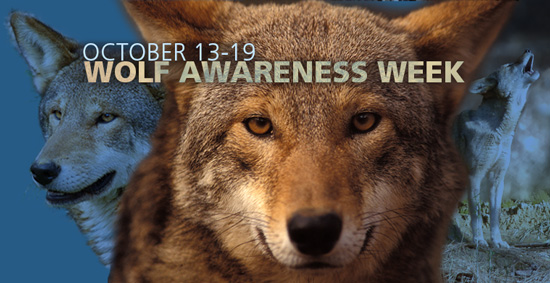 I’m afraid I was so busy catching up after my trip that I missed this, so here’s to more catching up!  Last week was Wolf Awareness Week!   I’ve done a lot on wolves in the past so I suggest you check out these posts for further details on wolves.  We have Introduction to the Wolf; information about the Wolf Conservation Center in South Salem, New York; an interview with the Wolf Conservation Center’s Volunteer Coordinator and Operations Manager, Spencer Wilhelm, Wolf Conservation Center Interview Part 1; and last year we got to learn about wolf hunts in Wolf Awareness Week and the Wolf Hunt.  Some time this week I’m going to post some information I learned while attending The Wildlife Society’s Annual Conference where I attended a general session on wolf recovery, conservation, and more, so stay tuned!

I interrupt your previously scheduled “defensive adaptation” to bring you Wolf Awareness Week!  Last year I wrote an Introduction to the Wolf, described the Wolf Conservation Center here in New York, and gave you an interview by their Volunteer Coordinator and Operations Manager, Spencer Wilhelm.  This year I’m going to give you an update on some of the controversy here in the United States regarding wolves.

With the removal of many reintroduced wolf populations from the Endangered Species Act, several states have stepped up to manage the species.  Hunting is one of the primary ways to do this in the United States.  Montana and Idaho started their wolf-hunting seasons in 2011 while Wyoming, Minnesota and Wisconsin are beginning their first season this year.  Some people are thrilled with the chance.  Others are fighting.

Wolf hunting is very controversial.  Those against the hunts don’t want wolves to be targeted for various reasons.  For example, the species was almost wiped out of the lower 48 states by settlers moving west.  It was only very recently that

some of the gray wolves were taken off the Endangered Species list, while the other American species, the Mexican gray wolf and the red wolf, are still endangered.  Much of the desire to hunt wolves comes from uneducated fear, not  necessarily a desire for ecological balance.  And there are rumors and hypotheses that wolf hunts are supported by big money industries such as ranching and not by scientific studies that may show an actual need.  I also learned recently that Wisconsin is allowing the use of hunting dogs in the search for wolves, but the wolves can and will kill the dogs.  This has some people saying that such a practice encourages animals fights.  Finally, there are some Native communities that have joined the fight to protect wolves.  Some tribes, such as the Chippewa, view wolves as sacred and are not happy about the creatures being killed.

Those that want to hunt wolves have a few different reasons too.  One is the belief that wolves will kill cattle and threaten pets and children.  While this can occur, the chance of it happening is actually quite lower than most people are aware of.  Healthy wolves are very people-shy and tend to stay away from populated areas if possible.  They don’t want to come into your back yard and steal your kids.  But, as civilization crept into their back yards, beasts that have been domesticated enough to take out their more wild instincts have been brought into the wolf domain.  Cattle would make easy targets for a hungry wolf pack, and sometimes they are hunted.  However, there are various techniques that can and have been used to deter wolves without killing them, and a healthy level of wild prey help too.

Another reason people want to hunt wolves is because wolves also hunt species humans like to hunt such as elk and deer.  Humans are much  more likely to overhunt a species than wolves are, and studies have shown that predators are needed for balance within an ecosystem, but humans often don’t like the competition.  A few less elk in a population means a smaller bag limit for human hunters themselves.

Finally, some people just want to hunt a top predator.  They want the “thrill”.  While all mammal meat can be eaten, its relatively rare for carnivorous species to be targeted for food.  So, it may be possible those hunters will eat their wolf, but in most cases it does seem like it’s the trophy and the story that matter more.

I’ve mentioned hunting management practices, though I was using deer as my primary example, but it can be applied to predators like wolves as well.  Since civ humans have decided to invade the surrounding environment, ecosystems are now managed to control things like population numbers.  Less land, fewer prey, and more people mean that people now want to control the population size of wolves as well, at least in areas they have been successfully reintroduced, so that they do not become so numerous that the other species in the area suffer.

Wolf hunting in Alaska is not new and has long been controversial.  One of the biggest areas of controversy has been the practice of aerial hunting.  Wolves are hard to track down.  They are fast, with great hearing and smell, and they are often afraid of humans.  What that means is that they are often long gone before you may even realize they were in the area to begin with.  Being up in a plane allows a hunter to cover far more territory.  Once the wolves are found the plane is landed and the hunters have a much better chance of getting their prey.

(Technically, a lot of places don’t allow you to chase the wolves or shoot them from the air, but it happens and it’s hard to regulate in order to prevent it.  This is considered an unfair advantage to the hunter.)

As more wolf hunts occur there will be more pressure for scientific studies, and hopefully, education for both sides.  Fables of the big bad wolf nearly drove this species to extinction, and many are threatened.  Let’s make sure that doesn’t happen again.  We need wolves.  They are a part of a healthy ecosystem, it’s the factory and the power plant that are not.